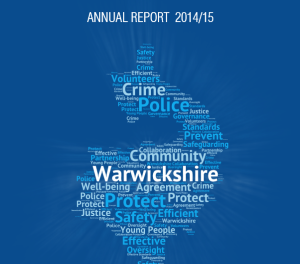 The period covered by the report (April 2014 to March 2015) saw total recorded crime fall by 3.7%, meaning that there were 1,061 fewer victims of crime than in the previous 12 months. With fewer than 75 crimes per day on average, Warwickshire remains one of the safest parts of the country in which to live, work or visit.

The report captures how Mr Ball has engaged with the people of Warwickshire by attending more than 50 community meetings; continued to scrutinise the work and performance of Warwickshire Police; and held the Chief Constable to account at six Public Scrutiny Meetings during the year.

The publication also examines how the PCC, supported by his staff, has ensured progress against the five key objectives of the Police and Crime Plan, financially supported community safety projects and continued to prioritise and support victims of crime through various projects.

Some of the key achievements include: