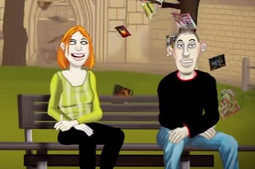 A new animation has been produced to warn young people about the dangers of taking so-called ‘legal high’ drugs.

The animation has been produced by Blackburn with Darwen Council in partnership with Linnell Communications and two young people from the borough who felt strongly about sharing their negative experiences of using synthetic cannabinoids in an attempt to deter others from doing the same.

New and Un-regulated Drugs are causing increasing concern amongst a range of health and social care professionals, youth workers, parents and the police across the UK.

The animation is aimed at young people aged between 16-25 years, as well as parents, carers and concerned others, to act as a generic warning on the dangers and negative impacts.

NUDS mimic some of the effects of illegal drugs – cannabinoids, stimulants and hallucinogens – and can be as powerful. Some young people have become seriously ill after using them whilst others have got involved in anti-social behaviour, crime, problematic relationships and family disputes.

If you’re worried about your or someone else’s drug or alcohol use there are a range of free and confidential treatment and recovery services available across Warwickshire: