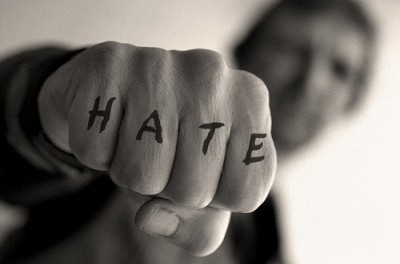 During National Hate Crime Week WCC and Warwickshire Police issued a series of blogs. So we don’t forget what the week was all about we thought it may be worth re-running this blog. It is the perspective from the mother of a victim of hate crime.

My daughter, Gemma Hayter, was murdered in 2010 by young people who had something of a reputation for bullying and being generally anti-social. Gemma only knew two of them prior to the night before she died. She met the other three the night before and was hit in the face by one of them. She did not actually want any further contact with that young woman and had to be talked round to going to the flat where she was beaten. Gemma died horrifically, she was severely beaten to death and suffered over one hundred bruises to her body. She was 4 weeks short of her 27th Birthday when she died.

I want you to know what they did because my family and I do not want anything like this to happen to anybody else. To this day I cannot understand how anybody could inflict this sort of thing on another human being. The violence in these two attacks which took place is absolutely unbelievable. I do not know why they did what they did, it devastated so many lives, even their own families must have been affected; how do you accept that your teenage son or daughter committed such horrific acts? They acted like a pack of wild animals.

Unfortunately I cannot change any of what happened. I wish I could. However, I can help ensure no other family has to go through what my family went through.

Gemma was different, she had Learning Difficulties, she looked different. I am sure that if she had survived these attacks she would have forgiven them. She craved friends, she forgave anybody anything just to keep their friendship. Not friendship as you and I think of it, but just some sort of acceptance was enough for her. Several times when she was growing up comments would be made to her, even when she was with me and I had found myself defending her. Why be nasty to someone just because they are different? She had been bullied all of her life, had the mickey taken out of her and it used to break my heart every time it happened.

Even the people who are being targetted do not report this crime, and it is a crime. If you witness something that is not acceptable to you, report it. You are not going to get into trouble for doing it. The police want to hear from you. If you are being bullied or intimidated in any way because of who you are, report it. If one of your children, an uncle, an auntie, grandparents, a person down the street, a complete stranger, a friend, is being bullied or you even think they may be being bullied or intimidated because of who they are, report it. We have to stamp this crime out, make people aware that they are not going to get away with harassing innocent people. It is not a crime to be different.

Since my daughter died, rules and regulations have been changed, people are more aware. The Serious Case Review into Gemma’s death is being used to teach students in universities and colleges throughout the UK, that is great as far as my family and I are concerned, it means that Gemma did not die in vain. Lessons have been learned and hopefully no other family will go through what we have.

If you think you know someone who may be unable to lead their lives in relative peace because of intimidation and bullying please report it. If you yourself are subject to any form of intimidation report it. If someone had reported the behaviour of the five who killed Gemma then perhaps they would not have done what they did. They would not be residing in prison for the next 12 to 25 years. My family and their families would not be regretting their behaviour for the rest of our lives.

In Warwickshire, we take dealing with hate crime seriously. Across organisations people are working together to reduce it further, but we can’t do this without you. If you have been a victim and didn’t report it, please do report it. The police are there to help you and support is available. Don’t suffer alone, we are here to help. Call Warwickshire Police on 101 to report incidents or Crimestoppers (the only independent crime fighting charity) on 0800 555 111 if you want to remain anonymous.