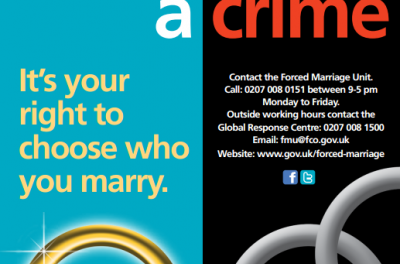 The government’s Forced Marriage Unit (FMU) has launched their summer campaign against the abuse that is forced marriage. It will run from the 12th until the 22nd, which is in time to target the spike summer period where families use the opportunity of the long holiday to take individuals overseas for marriages.  The FMU will be using this time to make potential victims aware of the risks, and potential perpetrators aware of the consequences.

In 2014, Forced marriage was made a criminal offence in the UK. This was put in place to better protect would-be victims and to make people aware just how abhorrent this out-of-date practice is.

The pressure put on people to marry against their will can be physical (including threats, actual physical violence and sexual violence) or emotional and psychological (for example, when someone is made to feel like they’re bringing shame on their family). Financial abuse (taking your wages or not giving you any money) can also be a factor. And If themarriage does go ahead, there is still the chance that the above may still happen.

More information can be found here