Facebook accounts belonging to convicted child sex offenders have been uncovered by a BBC investigation.

BBC Radio 4’s File on 4 programme discovered 22 profiles belonging to men convicted of child sex offences, which included grooming a child on Facebook and attempting to meet her for sex.

Six of the accounts remained live three weeks after the BBC reported them. According to the platform’s own rules, convicted sex offenders are not allowed to use the social media network.

Facebook’s UK policy director Simon Milner said the company was effective in dealing with the issue.

He said he appreciated the BBC bringing the pages to light but said Facebook worked proactively to search out behaviour that should not be happening on the site.

Among the profiles uncovered was one belonging to Bruce Cordwell, 20, who groomed 15-year-old Kayleigh Haywood through Facebook and Whatsapp just days before she was raped and murdered by another man, Stephen Beadman, in November 2015.

Kayleigh, from Measham, Leicestershire, was contacted by 28-year-old Luke Harlow on Facebook in 2015 and the pair exchanged more than 2,600 messages during a two-week period.

The details of what happened to Kayleigh have been put into a five minute film, by Leicestershire Police, see below. Caution: if shown in cinemas, the film below would rated as a 15 certificate.

Meanwhile, exclusive figures obtained by File on 4 through Freedom of Information requests revealed the most popular social media platforms had been linked to more than 7,000 reports of child sex crimes over the past three years.

Child Sexual Exploitation is happening in Warwickshire.
Something’s Not Right is the acclaimed multi agency child sexual exploitation campaign and continues to raise awareness of CSE and offer support in Warwickshire. The campaign encourages people to think about situations they may see or be involved in on a daily basis and if Something’s Not Right seek professional advice and guidance. 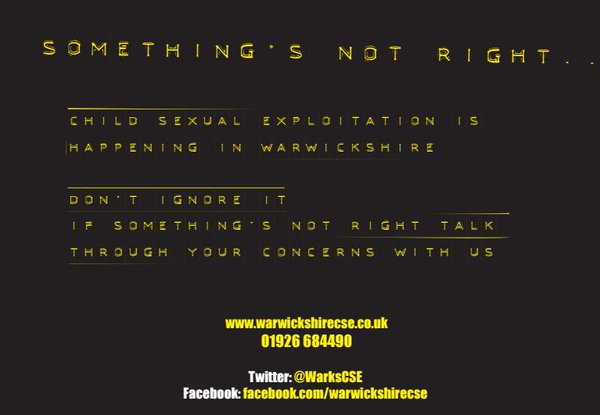 Don’t risk ignoring it. Call 01926 684490 to discuss your concerns or visit http://warwickshirecse.co.uk

Anyone who is concerned by something they see online relating to children and young people can make a report to CEOP.

Information and advice aimed at young people, as well as dedicated advice for parents, carers and teachers can be found on the ThinkUKnow website.

If you would like support as a result of becoming a victim of any crime, contact Warwickshire Victim Support on 01926 682 693.