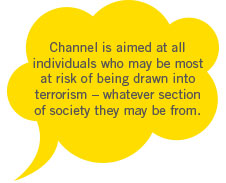 A far right activist Ryan Wildman turned his life around after being referred into the Channel Panel, referral system for the Prevent programme. In what is the first-ever interview with a far right activist on the government programme, Ryan told ITV News how he had left his extreme views behind after being referred into Channel Panel.

Before he was enrolled on Prevent and Channel, Ryan was involved with far right groups. He adopted the groups’ extreme views and had even experimented with making rudimentary explosives with parts he ordered online. But he says it was thanks to his mentor on the programme, Nick Daines, that he was able to move on. Mr Daines, Ryan’s mentor, told ITV News the Prevent programme was not about “reprogramming” people, but about encouraging “positive choices”.

Nick Daines successfully mentors some Channel referrals in Warwickshire and supports Prevent work delivered in the area. Below the photograph shows Nick speaking at an event in Warwickshire earlier in the year about working with ideological views held by many referred through Channel Panel.