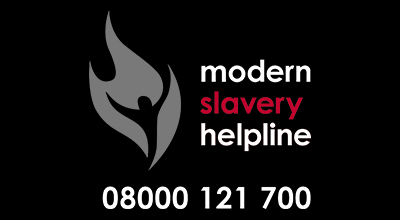 Slavery is not merely a historical relic. According to the International Labour Organisation (ILO), more than 40 million people worldwide are victims of modern slavery.

Modern Slavery in the UK is defined within the Modern Slavery Act 2015. The Act categorises offences of Slavery, Servitude and Forced or Compulsory Labour and Human Trafficking.

These crimes include holding a person in a position of slavery, servitude, forced or compulsory labour, or facilitating their travel with the intention of exploiting them soon after.  Although human trafficking often involves an international cross-border element, it is also possible to be a victim of modern slavery within your own country.

December 2 is International Day for the Abolition of Slavery. In recognition of this, we are asking people to take a moment to think about the signs that someone may be a victim of modern slavery and learn how to report any concerns.

If you hold information that could lead to the identification, discovery and recovery of victims in the UK, you can contact the Modern Slavery Helpline on 08000 121 700.